Use Liquid Ring Vacuum Pumps for Vacuuming in Industrial Applications

Liquid ring vacuum pump is one of the most commonly used vacuum pumps in industrial vacuuming applications.  Unlike other equipment, this pump handles air with vapor or liquid molecules.  The other system are not able to handle gas vapor and wet loads as the liquid reduces the sealing properties and also washes away the lubricant.

1. Liquid ring vacuum pump basically contain an impeller with vanes mounted on a cylindrical housing. It is partially filled with a liquid which act as a sealant.  The rotor vane is eccentrically positioned such that the vanes seem to be off center from the cylindrical housing. The gas inlet and outlet are positioned on opposite sides of the impeller.

2. The rotary motion of the impeller throws the liquid in the pump to the sides of the container by centrifugal forces. This liquid forms an eccentric rotating ring round the peripheral of the casing.

3. Because the impeller is eccentrically placed in the cylindrical housing, the vane spacing on one side of the pump is greater than the other side. This enables the pump to create a pressure differential between the two sides. 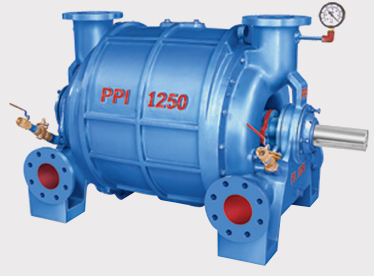 Comparison between Liquid Ring and Other Vacuum Pumps

1. Liquid ring system differ from other pumps in construction and operation. It relies on centrifugal forces and the liquid ring to pump the gases.

2. The liquid ring forms a sealant round the container which prevents gases from escaping and this increases the efficiency of the pump.  This greatly reduces the friction force between the rotating and stationary parts. Subsequently, less energy is wasted during the vacuuming process. In other it, the rotating parts must come into contact with the stationary parts.

3. As the pump rotates, there is a cyclic variation in the volume of the chamber created by the liquid and the cylindrical chamber causes the pump action.

1. It can either be single stage or double stage. Double stage pumps have two impellers mounted on the same shaft with one system be smaller that the other. 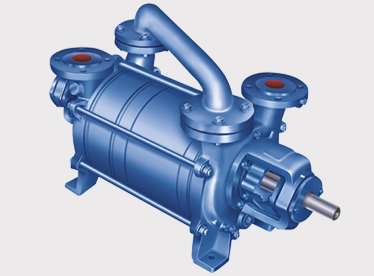 Efficiency and Other Performance Measures

1. Vacuum ring pump achieve high pumping efficiency even when using wet loads.  Their performance is affected by pressure and temperature at inlet, mass flow rate of the wet load, the type of liquid sealant used, outlet pressure and the impeller speed.

2. The sealing fluid plays a very important role. If not properly selected, the rotating fluid boils and causes cavitations on the impeller and cylindrical housing.

Liquid ring are very efficient in pumping out wet gases in industrial systems. They rely on centrifugal forces, the sealing liquid and the pressure differential to create a vacuum.

This Press Release has been posted by Ajit Joshi.